You Are Here: Searching for a Poetry Road Map 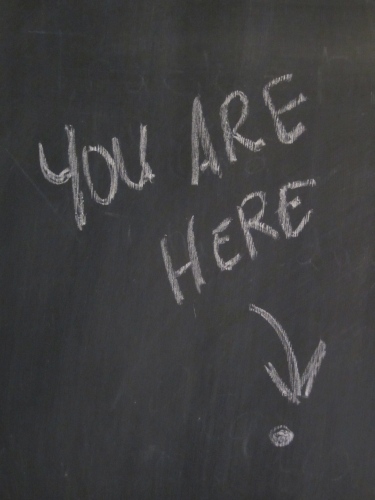 I have a handful (five to ten) poems that are not working, and I suspect that they are not working for the same reason. I wish there were a map for finding my way through a poem, but it’s never so simple. With any creative project, the process of becoming immersed–or lost in the middle–is most of the experience. Recently, I read two different takes on writers finding their way through poems or stories.

The first article I read, “Beginnings,” is by poet C.K. Williams, Pulitzer Prize winner, who describes his early years of writing poems and his constant dissatisfaction with the results:

It was simply one hopelessly bad poem after another. I knew the poems were bad, and although I did manage to write one that pleased me and that I published, a memory of childhood called “Sleeping Over,” I was mostly lost, and terribly frustrated. I felt clearly–I’m not sure how I arrived at the notion–that I wanted my poetry to have an urgency about it, an ethical gravity: I wanted it to be about what was most important to me when I was most serious with myself, but I had no idea how to accomplish any of that. – C.K. Williams

I would not have guessed that a Pulitzer Prize winner experienced so much frustration. I look at poets who have multiple publications and prizes and imagine how easy writing poetry must be for them–easier than for me. C.K. Williams did, eventually, find a solution to his early writing struggles.

C.K. Williams relates how he tried for four or five years to write a poem on the Holocaust and Anne Frank and had no luck. His breakthrough came during the process of writing a letter to an editor during the Civil Rights Movement of the 1960’s. The thinking process he went through to write that letter–connecting the Holocaust and Civil Rights–helped him to create a structure for the Anne Frank poem. “…Something about the way I’d had to split myself from myself, the way I’d had to confront the falsity and self-forgiveness of my own attitudes…opened up a new way of thinking for me. Without understanding how, I’d created a method of composition for myself that, no matter what stylistic changes my work has gone through, has remained basic to the way I conceive poems.”

The second author who caught my attention is Neil Gaiman. I was curious about how long he worked on his book American Gods before it finally came together. (Gaiman’s comments are from the Reader’s Guide included with the novel.) The book has a road-trip theme with multiple characters, towns, cities, roadside attractions, and various historical narratives, and it details a coming war between the gods of the old world brought to America, and the gods of the new world: TV, the internet, and money. Gaiman had an initial idea for his novel in June 1997: “All I knew at the time was it was the beginning of something. I hadn’t a clue what kind of something. Movie? TV series? Short story?…So there I was, four years ago, with only a beginning…A year later, I had a story in my head about these people…I wrote a page and gave up, mainly because the two men didn’t seem to come to the town together…In September 1998, I tried writing that story again, as a first person narrative…I covered about ten pages, and then stopped. I still wasn’t comfortable with it.” Gaiman knew the book’s title but couldn’t get the protagonist’s name right. Once Gaiman had the character’s name, he was able to write the story, and wrote chapter one in December 1998. Chapter two was written in June 1999, two years after the initial spark. The book was published in 2001.

Writing is a long process, and I continually remind myself that a quick dash to the finish is not the point. The longer I can feel comfortable with the middle of things, with uncertainly, the more I can allow subtleties and nuances to emerge.

This last image is from a book called Steal Like an Artist by Austin Kleon. It is quick to flip through and filled with black-and-white photos, drawings, and reminders of what it takes to live a creative life. Lots of wisdom here. Distance and insight are linked, so if you are feeling unsure of your direction, give yourself some space, some downtime, or explore something new.

More on Neil Gaiman’s books and his journal here.